The History of the Roundtop Filling Station

Located on a once well-traveled section of U.S. Highway 67 between St. Louis and Little Rock, the Roundtop Filling Station was built in 1936 by the Justin Matthews Company for the Sinclair Refining Company, operating in Arkansas as the Pierce Oil Company. It is believed that Matthews' resident architect, Frank M. Carmean, designed the unique look of the Roundtop. Local builders and brothers, C. C. and Powderly Eubanks, constructed the building while working for Matthews.

Wallace David "Happy" Williford was born on June 28, 1918, in Jacksonville, Arkansas. Williford attended Jacksonville Public Schools and was president of his senior class. He got his nickname because he was known to be happy. According to family and friends, Williford was always smiling and had something nice to say to everyone. In 1936, Williford was a senior at Jacksonville High School and worked at a Pierce station in his hometown. When the Roundtop opened, Pierce asked him to operate its new station. Williford agreed and worked at the Roundtop before and after school. During school hours, Williford paid other men to run the station for him, which was quite difficult considering he paid just $3.50 a week. Pierce charged Williford 2 cents per gallon of gas sold. 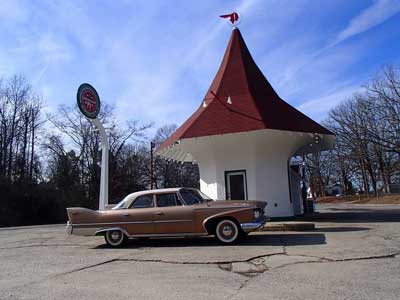 In the early 1950s, Pierce sold the Roundtop to the Phillips Petroleum Company, and the station became a Phillips 66. Williford bought the Roundtop in 1957 for $8,000. Business there was good, and he opened another station at the foot of the Broadway Bridge in North Little Rock (near present-day Dickey Stephens Park).

By 1958, Willford opened a 3rd station at 923 East Broadway in North Little Rock called "Happy's Service." Williford leased the Roundtop during the 1960s and early 1970s. By 1962, the Roundtop sold DX gasoline. In the mid-1970s, Williford returned to the Roundtop and operated it exclusively until 1981, when he retired and closed the station.

Williford tried to sell the station at auction in the late 1980s, but the winning bidder at the sale never tendered the funds.

Local businessman George E. Brown purchased the Roundtop in 1991, planning to renovate the station, but never did. Mr. Brown died in 2000. In 2003, Brown's heirs donated the Roundtop to the City of Sherwood. The abandoned filling station had deteriorated considerably by that time, and, because it was not secured, the interior of the building could be accessed by anyone, making it the target of vandalism and theft.

Thanks to the efforts of the Arkansas Historic Preservation Program (AHPP), the Roundtop was listed in the National Register of Historic Places in 2008 for its association with the development of Arkansas highway culture and because the station is the only known example of this type of filling station left in the state.

In 2010, the Roundtop was featured in "The Last Ride," a movie about the last days of country singer, Hank Williams, Sr. The film was directed by Arkansas native Harry Thomason and starred Henry Thomas and Kaley Cuoco. The movie crew did some work to stabilize the building for filming.

During this time, several articles about the Roundtop appeared in local and statewide newspapers. Happy Williford's daughters, Judy Jacobs of Fayetteville, Arkansas, and Vicki Teague of Savannah, Georgia, saw one of these articles and contacted Brown. As it turned out, Happy Williford and his wife, Marie, moved in 2007 to Savannah. Marie Williford died in August, 2007, but Happy was still alive and well. Brown was able to send questions about the Roundtop to Williford through his daughters and learned more about the building's past.

In May, 2013, the Roundtop was named to the Historic Preservation Alliance of Arkansas's Most Endangered Historic Places List, bringing even more attention to the property. In June, 2013, the City of Sherwood received a $50,000 historic preservation grant from the AHPP for the rehabilitation of the Roundtop. The match money for the grant was provided by private donations and funds from the City of Sherwood and the Sherwood Chamber of Commerce. Philip Quandt of Taggart Architects in North Little Rock prepared plans for the building's rehabilitation, and PDC Construction of Little Rock was hired as the general contractor.

Phase I of the project began in April, 2014, which consisted of securing and stabilizing the building, replacement of almost every stud in the building due to extensive termite damage, the concrete floors, and the roof. Sherwood was awarded a second grant from the AHPP ($78,000) in July, 2014 to complete the rehabilitation of the building.

Sadly, on November 2, 2014, a fire damaged the building's exterior. The Sherwood Police Department reported it an arson attempt. No arrests were made.

Phase II of the project was completed on January 3, 2015, and the old filling station is now used by the Sherwood Police Department as its Southside Substation.

Happy Williford was very excited to hear about rehabilitation efforts at the Roundtop. He routinely told his neighbors in Savannah that his filling station was becoming a "national park." Williford died on March 8, 2014, at the age of 95. On March 13, 2014, a memorial service was held at Griffin Leggett-Rest Hills Funeral Home and Memorial Park in Sherwood, where friends and family gathered to remember Happy Williford. At the request of Williford's family, Darrell Brown officiated the service. Afterwards, Williford's family and friends were given the opportunity to tour the Roundtop where they reminisced about Happy and his beloved gas station.
Report a Concern
Submit any issues with us
Agendas & Minutes
Keep up to date
Animal Services & Adoptions
Visit our shelter
Notify Me®
Receive Notifications
Permits Portal
Click to apply for a permit
[]